In this blog post I feature a full set of measurements on the ES-290 Biradial Wood Horn with the JBL 2446H compression driver.  I then test custom carbon fiber diaphragms against the stock titanium units.  I then test damping material in the rear chamber. 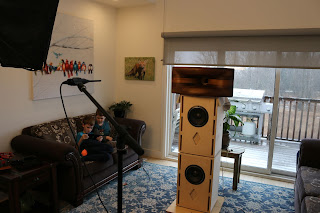 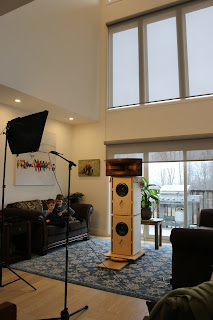 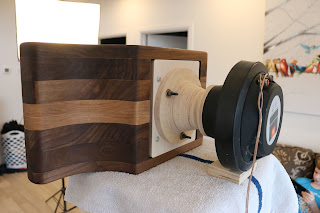 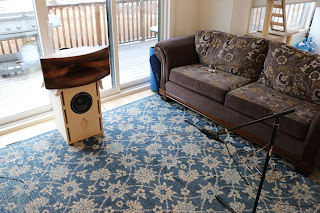 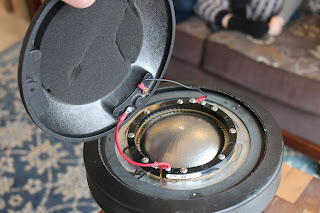 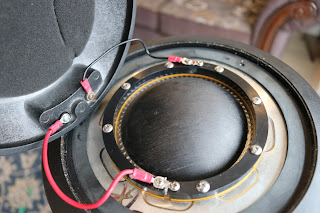 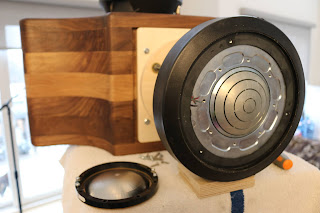 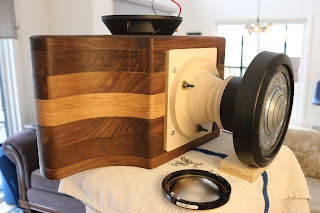 For set up in my living room since this is the largest space I have available.   I set my Datyon UMM-6 at 1 meter distance from the horn to conduct the measurements.  I also placed the microphone at the horn mouth for some of the distortion measurements. I used a custom built rotary table for the speaker.  The mic stays fixed and the speaker rotates for the off-axis measurements.

I began my testing by conducting an impedance sweep.  The lowest impedance peak is at 300Hz while there are a number of other peaks at 450Hz, & 700Hz. Upper treble breakup starts to occur at 13kHz.  This is to be expected considering this is a 4" titanium diaphragm.

I then conducted an on-axis frequency response.  Since this horn has a 300Hz cutoff the effect of room gain is a constributing factor to the overall response.  So to factor this in I've conducted two measurements. 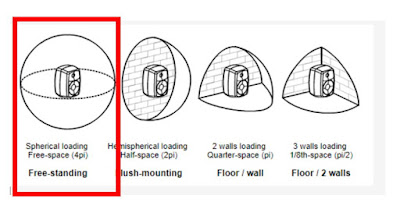 Below is the on-axis frequency response 1 meter distance with the stock JBL 2446H compression driver.

I then moved the horn to a Quarter Pi location that would be the typical location in a listening room. 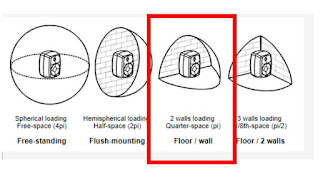 Overlaying the two responses shows the typical boost provided by the one pi placement.

I then measured distortion using a 1 meter mic distance.  I decided to take a second set of measurements with the mic located at the horn mouth.

I then conducted the same measurement however with the mic placed at the horn mouth.

For those interested I've shown the same measurement as above however with the distortion vertical scale changed from percent to dB from the fundamental.  Notice that third harmonic distortion is a full -68dB down at 1kHz (See highlighted yellow in chart below).  That's a very respectable result.

I then conducted off-axis measurements using my rotary table.  I decided to conduct the measurements all the way out to 90 degrees off axis.

For reference I've shown the same measurement but only out to 60 degrees off-axis.

I conducted burst decay at 1 meter and at the horn mouth.

I then conducted the same measurements to see the impact of the wool.

Working with a colleague we've built prototypes carbon epoxy composite diaphragms.  My colleague manufactures high performance sporting goods such as wind surf boards.  These diaphragms use the same technology as the products he manufactures on a regular basis.

speaker looks awesome did u ever post your listening impressions?

Have you considered using a Radian Beryllium 1.4" compression driver in this horn, e.g. the HF-NEO 951Be?