This blog post looks at the 2-way active crossover from Xkitz.  The Xkitz product link can be found here.   The Xkitz is a fully analogue crossover sold as a circuit board only.  The user must power the board with 10-24V DC power supply which is not included. 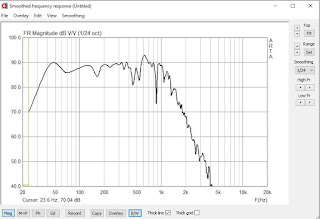 Xkitz touts this product as a true audiophile device which is encouraging especially if you consider what is currently available in the product category.  I've tried active crossovers in the past however they were either intended for pro sound or car audio applications.  Neither produced what I would consider 'audiophile' sound quality.

There is also many new DSP type units entering the market such as those from MiniDSP, Dayton, or in the pro sound segment DBX or Behrenger to name a few common brands.

From the four different DSP units I've tried in the past non of them achieved the audiophile sound quality even using objective measurement where the MiniDSP 2x4 had introduced measurable distortion and significantly higher noise floor.  However I still use my MiniDSP 2x4 for testing various crossover points and other test setups.

When ordering the Xkitz unit I specified a 1.2kHz crossover point since I wanted to see how it would fare with my ES-800 and ES-1200 biradial horns.  I set the crossover up with the Autumn Series Bass cabinet which uses a single 8" Fostex FW208HS woofer in a small onken enclosure.  The Horn I used was the ES-800 with the TAD TD-2001 compression driver.  I then setup my MiniDSP 2x4 along side with the same crossover point so that I could quickly swap RCA cables and do a listening comparison.

I was able to get a relatively flat frequency response once I dialed in the correct amount of baffle step compensation using the adjustable pots on the Xkitz Circuit Board.

I then measured the horn's response and adjusted the level to match that of the low frequency.

I decided to also produce some burst decay plots for interest's sake.  As a side note to this review, notice how the woofer's burst decay results (under 1.2kHz) is not nearly as clean as the TAD TD-2001.   This is pretty revealing as to why many will attempt to horn load as low as possible since the horn has such superior sound quality.

Distortion remains nicely low through the crossover point of 1.2kHz. 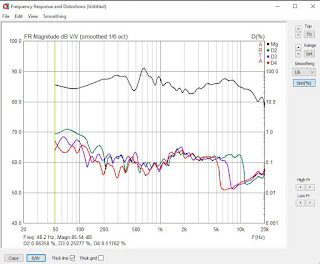 The Xkitz sounded far superior to the MiniDSP 2x4 unit.  This may seem obvious to most since the MiniDSP is having the introduce an addition AD/DA conversion where the Xkitz does not.  However I was pleasantly surprise that the Xkitz did not introduce any hiss or noise through the 105dB sensitive horns.  Only when I placed my ear right up to the horn could I hear a very faint hiss noise.

The Xkitz sounded excellent.  There was no reduction in sound quality by introducing the Xkitz into the system.  It did not seem to have any sound of it's own and simply filtered the sound for low pass and high pass.

I decided to compare the miniDSP against the Xkitz when using my turntable as a source.  This was a great test as truly revealing the benefits of retaining a fully analogue signal chain.  The MiniDSP introduced a veil over the sound that sounded very 2 dimensional.  There was a very noticeable  lack on low level detail and transient detail was softened.  When switching to the Xkitz the music came to life with full texture and detail.

The Xkitz fits a certain bracket of DIY Enthusiast that is looking to retain a fully analogue signal chain in their system.  This requires that the raw frequency response of each driver is relatively flat since the Xkitz does not offer EQ other than the Baffle Step Compensation adjustment.  Additionally the speakers must have the high frequency drivers physically time aligned with the midrange drivers since the Xkitz does not offer digital delay.  However it is usually pretty easy to time align drivers with horn speakers.  It is more difficult with with regular dome tweeters.  If the speaker designer can ensure some careful design elements are maintained then a very respectable sounding speaker can be achieved with the Xkitz.

Thanks for the review Joseph. You have to try the Nelson Pass’s analogue active crossover
https://www.firstwatt.com/pdf/art_diy%20biamp_6-24_%20crossover.pdf
https://diyaudiostore.com/products/diy-biamp-6-24-crossover