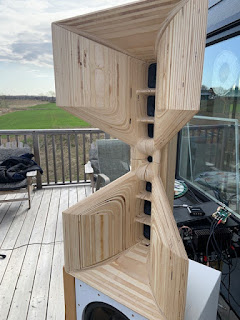 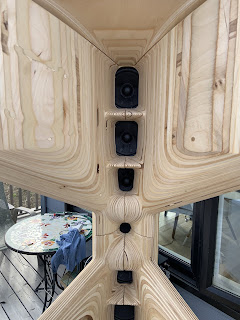 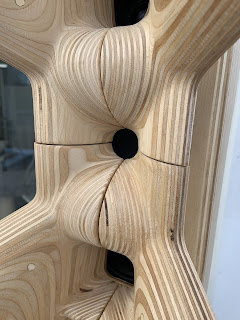 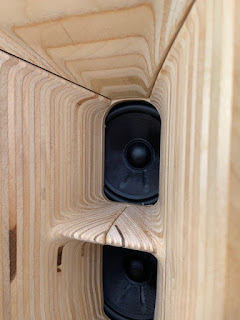 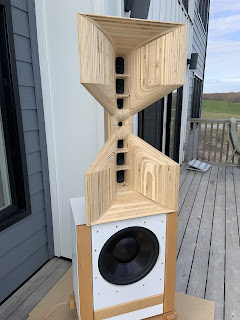 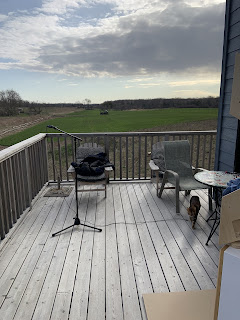 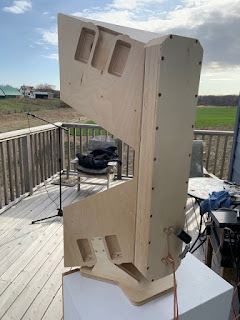 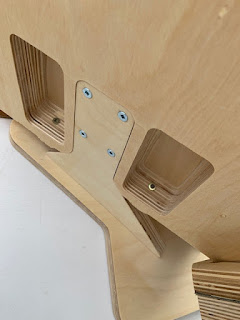 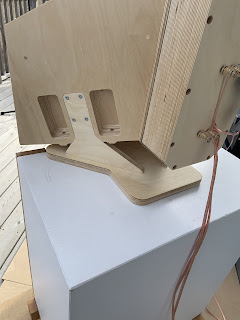 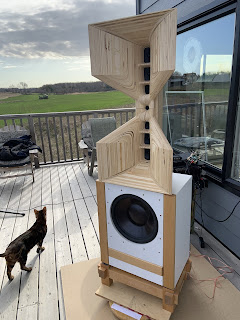 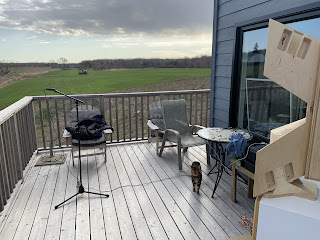 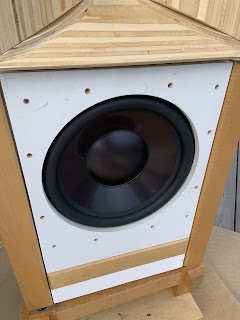 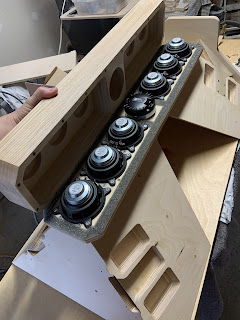 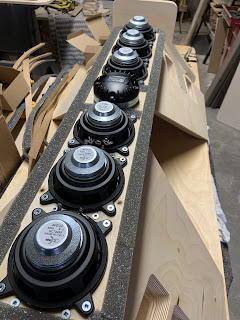 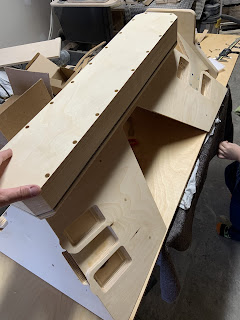 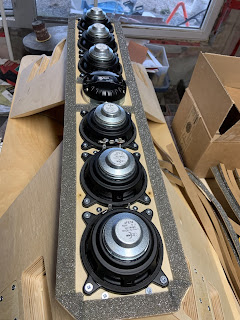 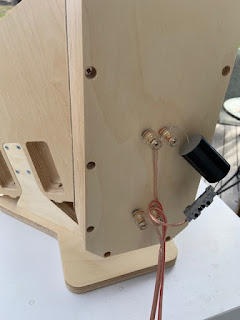 I began by doing electrical and acoustical measurement on the midrange horn.

The impedance response is precisely as calculated based on my simulations.  I've targeted a 200Hz system FS which puts it well below the horn's 350Hz Fc.   Also note that the six Faital 4FE32 drivers are wired in Series Parallel for a tube amp friendly 11 ohm load.  Wiring could be configured for a lower impedance and higher sensitivity (efficiency remains the same).

Below is the measured frequency response.  The midrange horn has a -3dB downpoint at around 180Hz.  The horn provides around 100dB sensitivity with the 11 ohm load.   The horn provides extension to around 1.5kHz where it gently falls -12dB at 2.6kHz.

The Nighthawk midrange front horn step response is shown below.

Below is the the horizontal off-axis performance of the midrange front horn.  The horn provides stable pattern control from about 600Hz to 4kHz where it starts to narrow.  Across it's bandwidth it provides a 90 degrees of horizontal coverage.

Showing the same measurements as an off-axis waterfall...

Distortion remains around 0.20% for D3 and D4 for the midrange horn's bandwidth.  Please note these values do not represent the actual lowest distortion capability of the speaker.  These measurements serve as an indicator that there is nothing wrong and that there are no sources of distortion that would hinder ultimate sound quality.

Showing the same measurement but in the dB scale shows that distortion is -59dB for D3 at 1kHz. 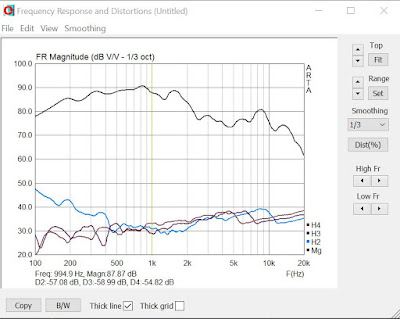 The high frequency horn uses one of my favourite affordable compression drivers.  The RCF ND-350 is combined with the central 2kHz 1” ES horn.  The horn does not have the full wrap-around geometry however it does in the vertical axis.

Below is the raw frequency response of the high frequency horn.

The HF Horn horizontal off-axis shows good pattern control down to around 3kHz.  Coverage remains wide at 90 degrees at 15kHz.

Showing the same measurements as a waterfall plot...

Distortion remains commendably low at 0.12% for D3 at 5kHz.

Showing the same measurement but with the dB scale...

Below is the frequency response with a standard 5kHz 24dB/LR crossover.  It should be noted that I made no attempt to equalize the response since the context of this blog post is to look at the raw data as it relates to driver and horn performance.  It is a simple matter to implement an EQ contour circuit in the passive crossover or simply apply PEQ if using DSP.  However there is a 10dB dip centered around 3.5kHz.  This dip is the result of the midrange's inability to extend to the 5kHz crossover point.  This is a shortcoming in the choice of midrange driver (Faital 4FE32).  This was only realized until after the acoustical measurements were completed.  For example the Fostex FE126EN with it's lower QTS and more aggessive rising response is only down -5dB at 5kHz in a similarly sized horn.

On the plus side the off-axis coloured polar map for the above frequency response shows very good pattern control across it's bandwidth.  There is some buildup of off-axis energy in the 3.5kHz region which may be a result of the on-axis frequency response dip.

As I went through my music albums each night I was very impressed by the sound of the Nighhawk.

The speakers had an uncanny ability to follow the most subtle modulations in the human voice, which translated into an effortless perception of the artist's portrayal of emotion.  Male and female vocals both had a sense of realism that became almost palpable.  Most often when this is the case there is a very defined window of sound that does not extend beyond the physical limits of the speakers like some electrostatic and planar speakers I've heard.   However the sounstage  easily extended to the side walls of the listening room.

Below is a ranking for my subjective impressions on the sound quality...

The Nighhawk provides some of the best male vocal clarity I've heard and very accurate musical timbre.  The sense of dynamic range is very enjoyable and on par with the vintage Altec A5 using multicellular horns.  My listening sessions lasted for hours as I toe tapped to many different genre of music.  Could this horn be considered an 'audiophile' speaker?  It certainly could as the overall sound is also refined and smooth, although not as smooth as the TAD TD-2001 featured in an early blog post.  This horn checks off a few more boxes than the TAD because it digs deep into the 200Hz region with ultra clean mid-bass reproduction combined with coherent source sound into the midrange and treble.   In future revisions I will continue to 'hone' the design including filling in the dip at 3.5kHz.