This blog post features the RCF ND-940 mounted to the ES-600 Biradial horn.  I will show the acoustical measurements as well as a suggested crossover schematic.

The RCF ND-650 is a large format compression driver with the following features. 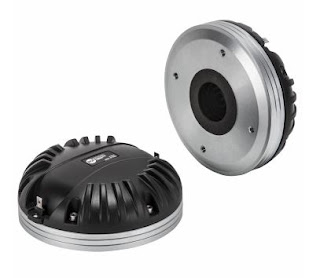 From my previous post I tested the ES-600 Biradial using the RCF ND-650.  This driver provided a very clean non fatiguing sound with very clean upper treble.  I struggled to achieve authoratative lower midrange which was improved by adding the wood rear chamber.  I was excited to try the ND-940 since it has a substantially larger diaphragm and claimed lower Fc of 500Hz.

I've come to trust RCF's published graphs which is really nice when trying to make buying or design decisions.  The RCF published frequency response was most likely mounted to Constant Directivity (CD) horn which explains the treble roll off starting at 4kHz.  My horns do not roll the treble off in the same way that a CD horn does, as you'll see below.

Continuing on here is the Burst Decay Result in ARTA.  This shows how quickly the driver and horn decays after the initial burst of sound generated by the measurement software.  A quicker decay means less resonance, better low level detail retrieval, and higher dynamic range.
The burst decays shows some subtle resonance above 10kHz but it isn't anything too serious.  There is also a minor resonance at 1.4kHz which can be seen as a small bump in the frequency response at the region.  Overall this is a very respectable burst decay plot given such a large voice coil.  Also the driver did not exhibit any harshness near the Fc of 600Hz.  As you can see from the burst decay plot the driver is relatively clean in the 500-1000Hz region.  This is the male vocal region and is pretty critical in my opinion.

I began crossover development using the RCF L15P400 woofer.  This woofer is a very high performance woofer.
Since I was measuring in a small room you can see the severe response dips at 110Hz.  I've shown woofer's near field response for reference overlaid in grey in the above graph.   As you can see I was able to achieve a very flat frequency response with my crossover.  It's always nice to be working with good drivers and a good horn!

I experimented with a variety of tube and solidstate amplifiers.  The above results were with a class A solid state amplfier.  Testing with a 300B monoblock amplifier showed a slightly rolled of treble by about 1.5dB.  Adding in a tube preamp introduced another 1.5dB roll off in the treble starting at 2Khz.

I decided to look at the Spectrogram results for both the solid state and tube amplfier to see if we could see any difference.  The Spectrogram is the same as the Burst Decay that's used in ARTA.  This shows how quickly the sound decays after the initial burst of sound from the measurement software.  A quicker decay results in better low level detail retreival and better dynamic range.  I've always preferred the sound of tube amplifiers when connected to high frequency compression drivers and this may confirm why.
Comparing the two spectrograms the tube am exhibits slightly faster decay in the 2kHz - 7kHz region.  The "tails" in this region continue to resonate past 0.5ms with the solid state amp.  With the tube amp they are almost fully decayed by 0.50ms.  To make this more clear I've zoomed in on this region of interest.
I know I may be straining at a microscopic detail but I found it interesting since there seems to always be a correlation between the subjective and objective measurement especially when it comes to the time domain measurements such as the spectrogram.  There are many that speak of the 'midrange magic' with Single Ended Triode Tube Amps and this may be part of the reason why.

Hello,
Absolutely beautiful horn!
What is the volume of the test enclosure for the L15P400? Closed box? Basreflex?
And is this woofer fast enough to play up to 600Hz? It has a rather high moving mass of 150g, even if the BL is around 24Tm.
Best Regards, Michiel, Belgium