This blog post features the test results for the BG Neo8 "S" version in the dual planar front horn.  This front horn was originally featured in a blog post which can be found here.

Introduction
Up until now all of my testing has been with the BG Neo8 Non-"S" version.  I had a customer that needed a passive crossover developed for his S versions and so he shipped me a quad set of drivers so that I could design the crossover for him.

According to the BG specification the S version has the following differences...


Unpacking
When I took the drivers out of the packaging I immediately could tell that these drivers were heavier and thicker than the standard version.

Mounting
The physical mounting was identical to the standard version 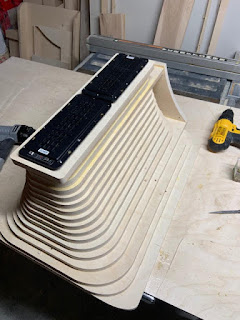 Test Setup
My test setup was done in my basement listening room where I place the horn in the corner of the room placed away from the wall so that the drivers were about 30cm away from the wall.  This would be very close to a 2Pi placement.
I placed my Dayton UMM-6 measurement mic at 1 meter distance.  I used REW measurement software since I could then export the FRD text file for use in Xsim3D simulation software.

Below shows the measured frequency response of the Dual BG Neo8S front horn.
The resulting frequency response is smoother than the standard version driver.  There is also a very nice gradual falling response from 1kHz and up.  This is actually the ideal target curve for any speaker.  Low frequency loading remains solid down to 200Hz.  Even though the response fell sharply past 13kHz I did not detect any lack of upper treble detail.

Listening Setup
For my listening session I used a 15" bass cabinet utilizing a RCF L15 Pro Sound Woofer mounted in a 100 liter cabinet tuned to 50Hz.  This provided a good combination since the woofer had very good transient detail to match the planar transducer.  Also, the sensitivity was a good match and I did not need to make any level adjustments.  The woofer cabinet also matched the physical width of the horn which ensured that the off-axis coverage pattern would be similar at the 200Hz crossover point.  Due to time constraints I simply connected the speaker to a TPA3116 chip amp which has about 15 watts of power.  The chip amp was then connected directly to my computer.  This would represent about the lowest sound quality source possible!

Despite the crude amplification and source (Youtube) the sound was still good enough to gauge the overall sound character of the horn.  I conducted my listening for about five hours while I worked on my computer during the day.  I mainly listened to live concerts on Youtube such as The Dave Matthews Band which has lots of percussion and dynamics.  I've concluded that the S version sounds noticeably better than the standard version mainly due to the smoother frequency response.  The 10kHz peak was not noticeable has having any excess semblance.  The treble was perfectly blended into the midrange with great coherency which allowed me to hear very subtle background cues.  With live music I could hear every single tiny cough or laugh from the crowd.  Clapping sounded very distinct like I could hear each person's clap.  The horn does equally well with either male or female vocals.  Cymbals sound completely natural.  Horned instruments come through as authentically dynamic which at times can be somewhat startling.  I decided to turn up the volume to around 90dB SPL at my chair and I found the scale of the sound tripled in size.  It was truly impressive even with just one horn.

Crossover
Since the frequency response was so flat it made crossover development very easy.  I used a simple 2nd order filter. 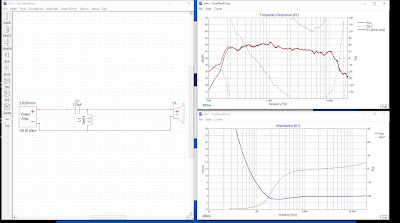 Below are the burst decay results using a 5ms gate in ARTA measurement software.  There is still some minor resonance at 11 kHz but overall exhibits a very clean waterfall plot.