This blog post features acoustical measurement of the ES-2000 Biradial Wood Horn with the new B&C DE360 compression driver.  This horn was discussed in detail in my previous post which can be found here.

I setup the ES-2000 on a tripod which sat on my rotary table.  I place the mic at 1 meter distance and performed an on-axis frequency response with distortion sweep.  Distortion jumps quickly below 2kHz.  With distortion set to Db scale instead of percent you can see the

Here are the on-axis frequency response measurements (1 meter) for the ES-2000 Biradial.  There was a surprising falling response above 10kHz which I will discuss later.  But otherwise the horn/driver combination produces a very flat response from 1.2kHz-10kHz.  This is +/- 1.0dB!

Below is the spectral burst decay. The burs decay results show exemplary results with no resonances in the upper treble (+10kHz).  This is a good result for a compression driver.

I then measured the step response.  The step response shows 3ms to come to rest which is about twice as long as the B&C DE120 which I will show later on in this blog post.

Below is the off-axis polar response.  The ES-2000 exhibit very uniform response off-axis and very wide coverage even up to 20kHz.   Coverage is 120 degrees at 10kHz and 90 degrees at 20kHz which is very good.

Extending my measurements out to a full 90 degrees off-axis shows the a little more of the pattern control into the room.  No smoothing was applied

I listened to this driver before conducting any of the acoustical tests.  I was a little disappointed with the clarity and so I decided to measure the response.  When I saw the falling response past 10kHz I attempted to apply some EQ to raise the response above 10kHz.  This helped a little bit but I found the overall sound quality to be lacking for audiophile applications.  I continued to listen with different crossover points and I settled on a 9kHz crossover point which allowed the falling response above 10kHz to integrate with my midrange horn.  Despite my efforts the results we not satisfactory.

I wondered as well if the horn was the contributor to the sound I was hearing.  I then mounted two other compression drivers for comparison.  I used the B&C DE120 which is a discontinued model now replaced by the DE110 or the DE111.  The DE120 is a regular dome style compression driver where the DE360 is a ring radiator style.  The third driver that I tested was the RCF ND350.

Below is the full set of measurements for the DE120 + ES-2000 combination.  The DE-120 exhibits similar distortion results as the DE360.

Below are the burst decay results. Because of the dome style diaphragm there is some breakup mode occurring starting at around 16kHz. 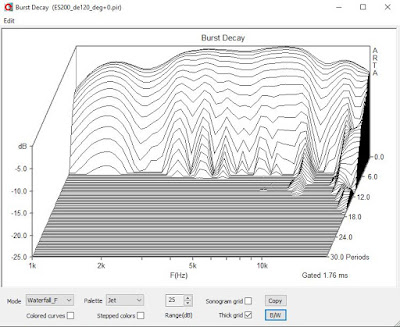 The step response shows a 1.5ms recovery time which is twice as short as the DE360's result (3ms).  This is the only objective test result that may indicated why I prefer the sound of this driver over the DE360. Otherwise the DE360 "Should" sound better than the DE120.

I found the DE120 to sound more enjoyable than the DE360.  The DE120 has a more immediate sound to the leading edge of transients.  Overall the driver sound smoother.  I would be curious to test the latest version of the DE120 from B&C which is the DE111.  I then tested the RCF ND-350 compression driver.

Worth noting on the burst decay results is that the breakup occurs even higher up in the frequency band than the DE120 despite the ND350 having a larger diaphragm (1.7" vs 1.4"). Breakup starts at 18kHz versus the 16kHz of the DE120.  The magnitude of the breakup is also less.

The step response is 1.6ms which is comparable to the B&C DE120

The RCF ND-350 exhibited the best sound quality of the group.  There was a noticeable increase in smoothness.  This combination certainly met my performance target for audiophile applications.

My listening tests were conducted with the Autumn Series speaker configuration No. 1142-01.  The midrange horn is the ES-600 Biradial which uses the RCF ND-840 compression driver which uses a 3" voice coil.  For convenience I used an active DSP unit for full adjustment of crossover points and EQ.  My goal here is to see how the ES-2000 can integrate into the ES-600 and investigate what the objective and subjective performance characteristics for this configuration.

Below is the frequency response that I was able to quite easily get with a simple 24dB/LR filter at 5kHz.

I found this setup to sound extremely good.  There is a lifelike presence to the sound that has excellent coherence and intelligibility.  I thought to myself that this a very 'mature' sound that simply sounds 'correct'.   The fact that I was using both RCF compression drivers for the midrange and treble likely helped with the balanced sound.  Even with one speaker playing the soundstage was actually quite wide and deep.

The B&C DE360 did not live up to my hope.  The B&C DE120 excelled over the DE360 in terms of smoothness and detail.  The RCF ND350 is a few notches ahead of either of the B&C drivers for dynamics and smoothness.  It has become one of my favouirite compression drivers.  The RCF ND-840 is a recent acquisition for me and has impressed me as well.  It has a very open midrange sound that digs deep into the lower midrange (550Hz) without any resonance.